Pimpom’s Story: How a Street Pup Came to Travel the World 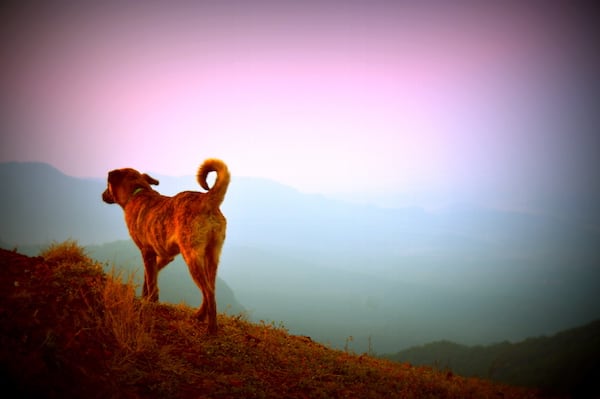 My name is Pimpom, and my story began in a small village in the Himalayan Mountains.

My siblings and I were born at the edge of a busy road, full of bustling cars, autos, buses and motorcycles. Our mother always did her best to warn us of the dangers of playing too close to the traffic, but we were such excited young pups that we rarely had time to listen.

When I was just three months old, I was hit by a car. It struck me so hard that I was thrown into a ditch where my family couldn’t see me. I was so scared, and every bit of my body hurt.

Just when I thought that no one would ever find me again, a group of children passed by on their way home from school. They stood around staring at me, asking each other what to do. Once they had made a decision, they scooped me up and took me to the Dharamsala Animal Rescue. There were so many barking dogs at the shelter, and I didn’t recognize any of them, so I felt really scared, and missed my mom, brothers and sisters so much.

The veterinarians checked me over and found that I had fluid in my lungs and bruised ribs, but luckily, no broken bones. They said that with some time and the right medicine I would heal and could be released back to where the children had found me. I couldn’t wait to return home and tell my family everything that had happened. 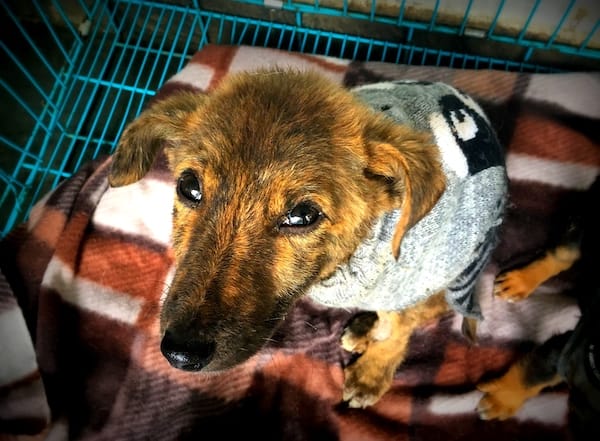 The people at the animal rescue were so kind. They fed me and took good care of me, and slowly I began to feel better. When I had lived in the streets, we had to eat whatever food we could find. Sometimes we didn’t find anything at all, and other times the food was so spicy that it felt like a thousand fire ants were biting my tongue and my belly. For the first time in my life, I didn’t have to worry about being hungry or eating unpleasant food. I only wished that my family could experience this nice feeling with me.

It was there, at the animal rescue, that I met Aunty. Aunty is from a far off land called Canada, and was volunteering at the shelter for a few months. She says that at the moment she first saw me she fell in love. She brought me to her home in the village where she cooked special food for us and kept me warm and safe. She gave me lots of hugs and always told me that I was beautiful.

Once I was stronger, we went on walks together in the mountains and met many people from the village. Everyone would greet me, “Namaste, Pimpom! How are you feeling today?” It was so nice, because I was beginning to feel cared for by everyone.

Aunty loves all animals, so each morning we would stop and say “hello” to all the goats, cows, horses, buffaloes, and dogs in the neighbourhood, and give them treats on our way to volunteer at the shelter.

When Aunty was leaving the village for good, she decided to adopt me and officially make me part of her family. It was such a joyous time, and I knew that even though I wasn’t going to go home, that I would be very happy living with her.

I realized that life would be different once we left the Himalayas, but I never could have imagined in my wildest puppy dreams, all the exciting adventures that were in store for us… 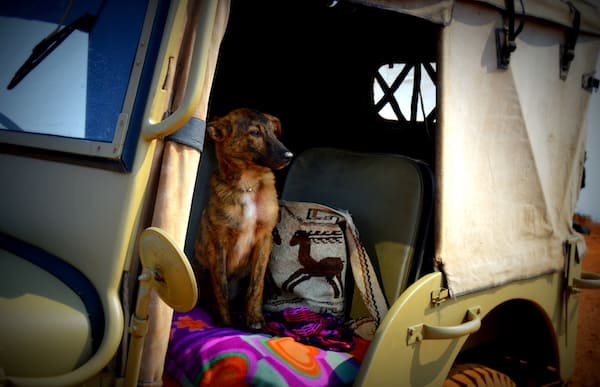 After experiencing my first bus, plane, and car rides, we arrived in a village called Shivamogga, in the Western Ghats, where we stayed at an old farm surrounded by a giant forest. The people there were really nice to me and nicknamed me Shiva, after their favourite Hindu God. They made delicious foods for me, with ingredients that they picked each day from their garden, and said that if you eat fresh, healthy food, which has been cooked with love, then you won’t get sick or need medicines. They said that their life was very simple, but I saw them working hard from early morning to evening. I think they enjoyed it though, because they were always smiling and singing, and took some rests in between. They made everything by hand; from the foods we ate, to the home we were living in, and they didn’t have to leave the farm much to buy anything because everything they needed was grown or made right there. Aunty says that they know how to live in harmony with the land.

At the farm, I learned how to protect a home from intruders. There was a troop of very naughty macaques in the area that were notorious for stealing fruits from the garden and raiding houses for anything they could get their hands on. It became my responsibility to sound the alarm and chase them away, but I was pretty certain that if I could steal yummy treats and make a great escape by climbing trees and jumping over houses, then I would do it too. With this in mind, I always gave them a minute or two to grab some bananas or chiku fruit before I alerted the farmers, and once the chase was on, there was so much excitement in the air that I think everyone was having fun, especially the monkeys.

Our next stop was at a reserve that was reforested by some very caring people. The land was really special because it was an elephant migration route, but someone had fenced it off and cut down all the trees so the elephants and other wild animals were no longer able to live there or even pass through to reach other forests. These people decided to buy the land, take down the fences and plant hundreds of new trees just for the animals to have a home again. Aunty wanted to spend time with them so she could learn how to do this too. She says it is very important for us to respect and protect the forest and all the creatures that live in it. Now the elephants, tigers, birds, snakes, insects, plants and everyone else can all live there happily once again. 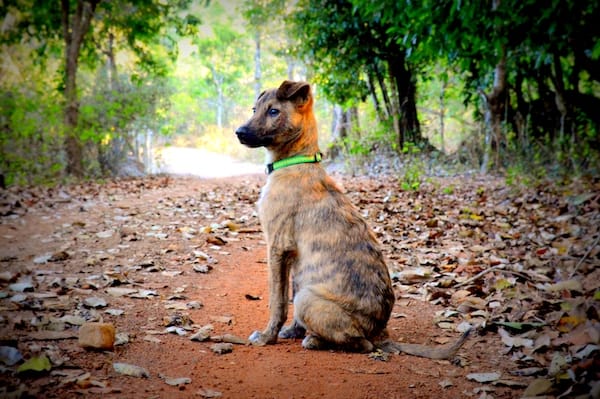 From there we took a jeep to a mountain peak called Kodachadri. Up there, I felt like I was on top of the world, looking down at the valleys, rivers and forests below. We spent the early morning watching the sun rise, and Aunty told me to make sure to greet the sun with a smile, and tell him to please shine on everyone, so we can all be healthy and happy. I sat on the hilltop with my eyes closed, enjoying the fresh breeze, and wished as hard as I could that the sun was shining on my family in the Himalayas just as it was shining on us.

Once we left the mountains we stopped in a small town where we saw a tiny puppy that had an injured leg. We bought him two little bowls and filled one with fresh water and the other with some of my food. He gobbled it up so quickly, just as I used to when I lived on the street. Aunty told the people in the nearby shops to please fill the bowls daily with food and water for him. They promised that they would, and one man stepped forward and proudly announced to everyone that he has been giving the puppy a bit of rice and milk from his restaurant every day. We all were very happy to hear this, and were reminded just how important it is to always take care of each other, especially the animals without a home. 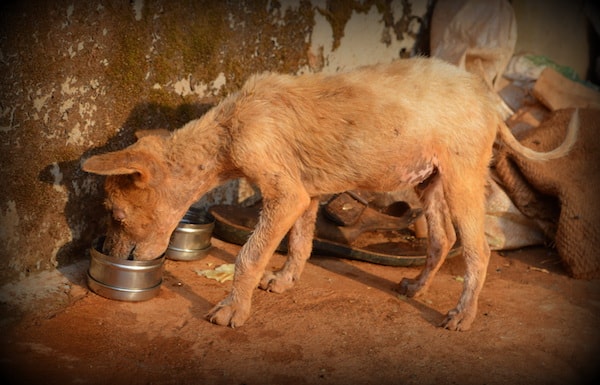 Some of the people asked what kind of breed I was and if I came all the way from Canada too. They were very surprised when Aunty explained that I was a pariah from the Himalayas, and that with proper care this little puppy could grow up to be as healthy and handsome as me, so we gave him a little bit more food to enjoy before we set off on our next adventure. This time we were heading to a giant waterfall called Jog Falls. 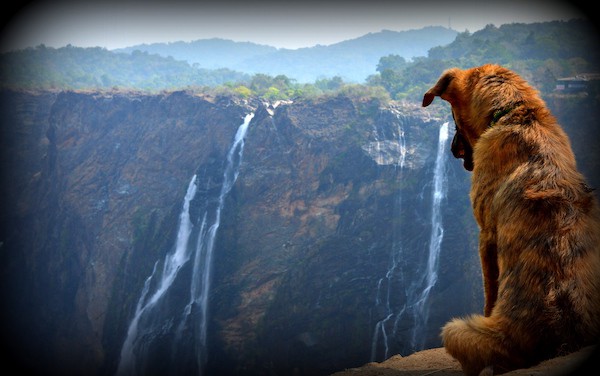 There, we sat and watched the water flowing and splashing for ages. It was so beautiful, and the sound was so calming that I felt like everything in the world was just as it should be.

As we got ready to leave, a group of dogs came closer to smell me. We noticed that a few of them had tumors from an illness that I remember some of the dogs having at the animal rescue. It was sad to see that these dogs weren’t getting the medicine that they needed to feel better like the ones at the shelter were. At that moment, I realized just how lucky I had been to be brought there when I was injured, and that without their help I would be suffering in the streets too. Before we left, I took one last look at the waterfall and wished with all my might that every dog could be as fortunate as me, to get the care they need, and find a loving home just as I did.

On my journey, some people have laughed and called me a pariah or street dog, as if it was a bad thing, but Aunty always tells me that I make her happy. I have realized that finding happiness and a sense of belonging are really the most important things in life, so I feel very special knowing that I bring happiness to Aunty, and that we both belong to one another.

We plan on leaving India one day to visit other parts of the world. I can’t imagine what else there could be to see out there, but Aunty has told me stories about her travels to Africa, Australia, South America and even the Arctic. She told me about the different animals, landscapes and people in each place. No matter where we go, I know it will be an exciting adventure, and I can’t wait to experience it. 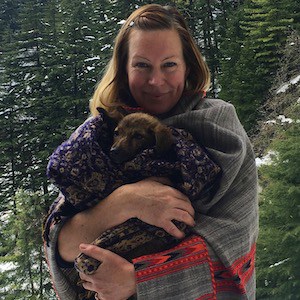 Sarah Foster Sarah Foster is an animal welfare and wildlife conservation enthusiast from Toronto, Canada. She founded Nosara Animal Care, in Costa Rica, and has traveled the world, volunteering for various animal organizations throughout South America, Africa and Asia. Sarah is presently writing books for children.  She volunteered at Dharamsala Animal Rescue in 2019 and fell in love with Pimpom.