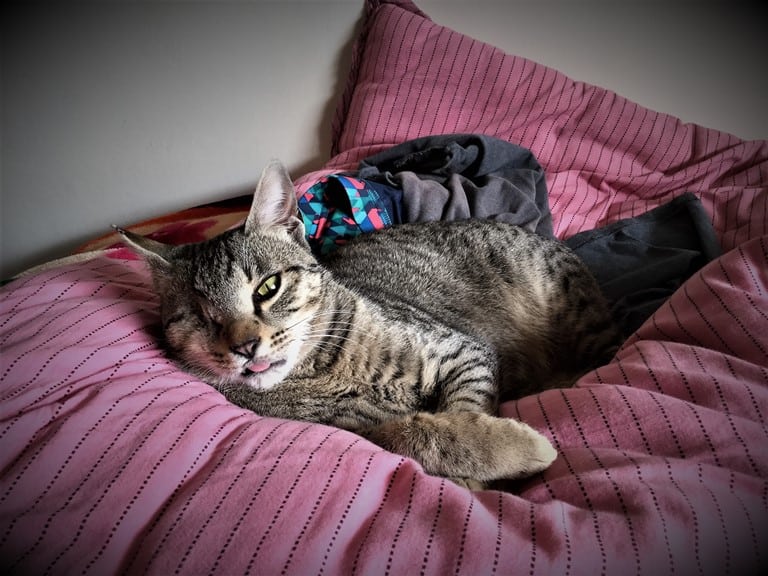 This is the story of Sonam, a one-eyed rescue cat who graced my life for a time.

Sonam the cat was introduced to my apartment building in Dharamsala, India, when he was only a few months old. His mother led him to all the cat-friendly doorways twice a day. He was very sweet, innocently bounding up to people, looking for a play-fight, and it didn’t take long for his little belly to become quite rotund.

After a month or so, Sonam disappeared. I figured he had found a food-source elsewhere. It was a rare occasion indeed when his cute grey shadow would once again grace my doorway. However, sometime later, he showed up and one of his eyes had been injured quite badly, some of his whiskers were missing, and there was a little bone showing on one of his back legs. ‘At least I can do something about this,’ I thought to myself while carrying him inside. I called our local rescue, Dharamsala Animal Rescue (DAR) and I was told that Sonam had to lose the eye. After the surgery, he returned to me to recuperate.

Sonam was a temporary resident in my house for almost two months. A couple of infections slowed down the healing process and the poor kitten had to struggle with being stuck in one room all the time. My own cat, Amrita, was thoroughly disgusted with the interloper and never hesitated in telling me.

Overnight, the kitchen cupboard transformed into a platform from which to launch herself at my head as I walked past—whenever she wanted to make her disgruntled point. I separated our apartment into two cat domains to maintain some kind of peace for all of us. Sometimes it was hilarious, sometimes it was not.

Between the two of them, I lost a tea pot, three mugs, a cushion, several rolls of toilet paper, four plants, and a pair of reading glasses. I had my cupboards emptied each day, and books torn up. I watched some of my own food run away from me after being distracted for a moment, and I developed a constant expectation of silent ankle attacks. I never thought I would ever get to the point of ‘too much cat’.

The upside to this conventional bourgeoisie suffering of mine was that Sonam had time to properly recuperate. The streets are tough for cats, and more so when they are injured. And what are possessions when weighed against another’s wellbeing?

Eventually, I noticed that Sonam’s eye-socket had completely healed over. He could finally be let outside. It was such a surprise to see him standing stationary for a minute while looking at the open door. I don’t think he could believe that he could go outside after the many weeks of trying to scratch the door open. But after a moment, off he went.

It was terrific to see so much energy be flung around, just as it used to be. He hung around nearby for the day but come evening, Sonam had disappeared altogether.

The following morning, I noticed Amrita watching something on the balcony above us. I looked up and there, in all of his glory, was Sonam, trying to catch bumble bees. He jumped from balcony to balcony without a second thought. I called out to him and he paused, looking down. I could almost hear him say ‘Whatever!’ as he ran off after another noisy bee. So much for meeting the needs of my attachment! I had definitely become accustomed to having that little guy in our family.

I haven’t seen Sonam since the bumble bee incident. I assume he has taken up again with his other feeders. I hope he has a grand time reclaiming his life outside and, should he become injured again, then Amrita and I will always make room for him. I am just really glad we could do something for him.

I’ll be eternally grateful that Sonam is still here to prance around after bumble bees.

Here you can create the content that will be used within the module.

Lozang Khadro has been an ordained cat-lover in the Tibetan Buddhist tradition for seven years, four of which she has lived in India.  Her hobbies include reading, watching The X Files, learning with the purpose of challenging her incorrect assumptions, and asking her cats if they need anything.

She believes an altruistic motivation is the best moral compass we can have.
Her favourite modern saying is by Imam Afroz Ali, and she believes it is much needed in the world today: ‘Even if you do not like or respect the behaviour or words of another, you must respect them because we are all the same.’