My Name is Ash – The Story of a Restrained Dog 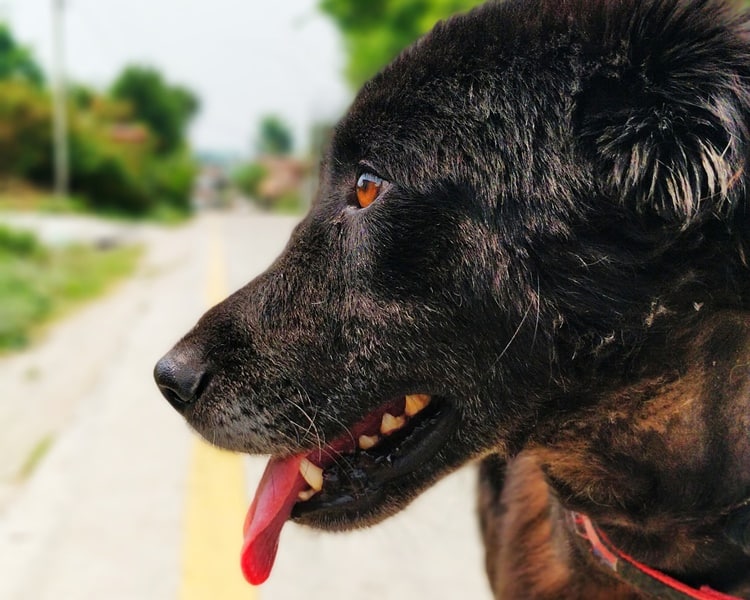 Although this story is based on true events, it is still a fictitious portrayal of a rescued street-dog who experienced serious trauma to the dermal tissue of his neck prior to arriving at Dharamsala Animal Rescue.

I don’t remember why there was a rope tied around my neck, but there always was. The other dogs I saw in the street were blessed with free-range lifestyles. But not me. I was always a restrained dog. Perhaps it because I wasn’t trusted by my master.

My youth was not youthful. I’d watch other dogs roam the streets, enjoying life’s pleasures, while I lay restrained. Some days I would pull at the rope, hoping for freedom. But I wouldn’t try this every day―the friction left my neck sore for too long. Speaking of soreness, I’d heard that your muscles get sore if you exhaust them too much―but I barely left my post, much less exercise. Still, I experienced a similar type of pain. It wasn’t long until I gave up on trying to feel freedom. I’ve become so numb to the pain that it became easier to just cope than to fight it.

It wasn’t a life. At least, not a life worth living. Those were the months I should have been learning, experimenting, and exploring. Learning what I could and couldn’t get away with. Learning how the traffic system works. Learning how to survive on chapati, and chapati alone. I slowly came to realize that if change was to come, only I would be able to make it happen.

I was an overlooked accessory for my master, and the rope with which I was restrained eventually became worn. This was my chance. An opportunity for me to overcome the glass ceiling that had existed my whole life. I closed my eyes, mustered my courage, and gave one forceful tug. The pain was excruciating, greater than ever, but the frayed rope gave way and I was free. In liberation, the pain persisted but I couldn’t risk making a noise, otherwise my master would come running out and catch me in the act of escaping. I was more comfortable being numb to the pain, but this newfound feeling of freedom was exhilarating and exactly what I’d been yearning for. I looked back at my empty post, one last time, then ran out into the world. 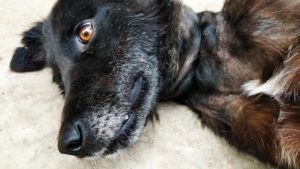 Scars from my time as a restrained dog

Life on the streets was no walk in the park. Food was scarce, and good company even scarcer. Other dogs had caretakers in the community who provided them with food and basic amenities, but I had nothing of the sort―I had left my master in search of a better life. The sun was hot, so hot that asphalt burnt my paws. In the languid waters of the local stream, I caught a glimpse of myself for the first time. I looked like the other street-dogs, only my neck was raw and crusted with blood. No wonder people hesitated to feed me anything other than pebbles and stones.

The days passed, each more slowly than the last―cars honked at me and passers-by avoided eye contact. I became weaker and weaker. Some days, when I’d find a good lot of food, I’d try to eat enough for several days, and then I’d rest. It was one of these days―a good day by my standards―that I got captured.

I was pounced upon and manhandled into the back of a truck. Surrounded by metal bars, the roughness of the road made it hard to work out where I was being taken. Once the rhythmic movements stopped, the gate of the enclosure opened and to my surprise, it was not my master who greeted me, but the rescue team from Dharamsala Animal Rescue (DAR). They are the reason I am still here today.

My mind has subconsciously repressed what happened next, but I was told the rope tied around my neck had become ingrown. My skin had started to grow over it and flies had laid eggs inside my wound. The smell of maggots feeding on necrotic tissue should have been a sign that I needed help, but I had become accustomed to the reek of my own decaying flesh.

Three weeks is all it took for my wound to heal. Sometimes I think that team at DAR were a little too cautious with me, making me wear a dreadful plastic cone around my neck. But I quickly realized that I needed their care and attention. Every day they would clean my wounds, feed me gourmet food, and give me somebody to lie next to. 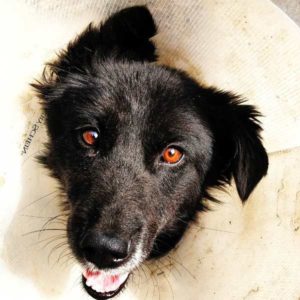 Happy, despite having to wear this stupid cone

All the staff at DAR were welcoming, but one gave me extra special attention. He helped treat me when I was first brought in, would bring me extra food when the other dogs couldn’t finish their portions, would sneak away from clinic duties to take me for surprise walks to the river. He knew just how to keep me happy, scratching my tailbone whenever I was having a bad day. He helped give me another chance at life.

I’ve been released back into the community now, and life has never been better. But I will never forget the team at DAR, particularly my special friend. After all, he named me after himself―that’s why my name is Ash. 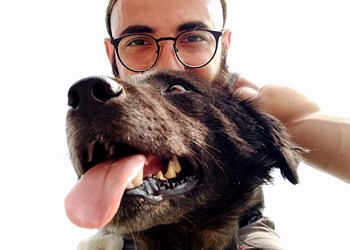 Ashkan Sadri, commonly known as Ash, is a Canadian researcher who has aspirations to be a vet. Formerly working in the field of breast cancer, he holds an MSc from the University of Western Ontario. After a recent stint as a volunteer at Dharamsala Animal Rescue, Ash is currently volunteering at The Primate Trust in Goa, a monkey rescue center, where he spends his days hanging with his fellow primates and taking pictures of their monkey business, which you can see on his Instagram account.