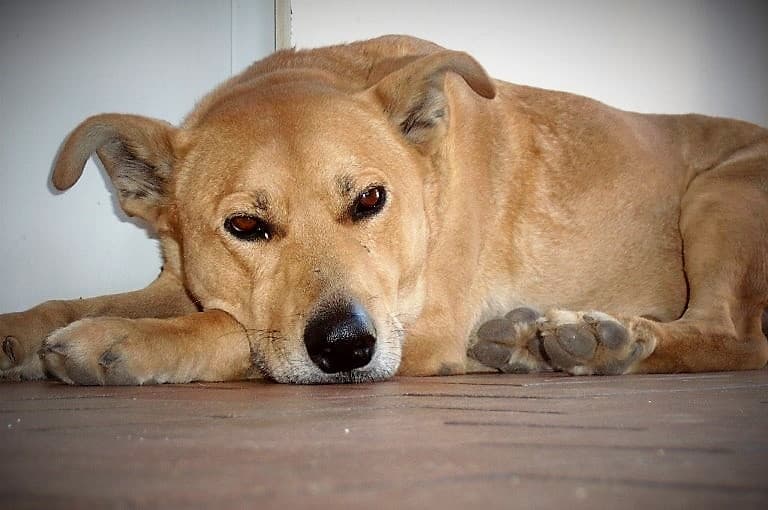 This is the story how a rescue puppy called Josh came into my life in the wee hours of the morning.

I lie awake in the early hours, remembering many years ago, when the unusual sound of the telephone had peeled through the darkness one night in my childhood home.

It’s a chilling sound―a phone ringing and shattering the silence at an unexpected time. It must’ve been about 1 a.m., and after only a few rings, the entire family was up―eyes glued to my mother, with knuckles pressed between clenched teeth. She answered the phone nervously, expecting bad news from overseas, avoiding our seeking eyes by looking at the floor.

She seemed confused. She stammered a few awkward questions and then postulated to the person on the other end that they must have the wrong number. ‘No,’ the man on the other end retorted, and, in broken English, he read back our telephone number and then the mispronounced names of both my mother and one of her PhD students who had driven up-country earlier that week. A dawning look of realization appeared on my mother’s face, and before I knew what was going on, we were all bundled into the car and heading over to some random bus station in the center of Namibia’s capital city, Windhoek.

A tall man wearing a thick woolen beanie climbed out of an eighteen-wheeler with a rucksack and handed it to my mother. The rucksack was dirty and worn. But it moved.

Back in the car, my mother unzipped the rucksack and two, beautiful, groggy, nervous-looking pups with protruding ribs and extremely distended bellies popped their heads out―eyes filled with consternation.

My mother’s student had been hitchhiking when she got a ride with a man who had to stop by his home on the journey. She had been waiting by the car when she spotted the two pups being kicked and shouted at. She had asked the man if she could have the dogs. He’d agreed, without a thought, and she had some quick thinking to do, as she was headed to a game reserve where pets were not allowed. She wrote my mother a quick note, popped the pups into a spare rucksack, flagged down a passing truck and asked the driver to phone my mother and leave the dogs with her when he got to Windhoek.

This was the start of what turned into a 15-year love affair. I was seven-years-old. 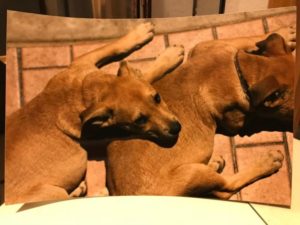 Everything had already been a little stormy at home. We were already preparing for the birth of my little sister, and now suddenly there were these two incredible little yellow fuzz balls running around playing tug of war with my Dad’s khaki socks, rolling over themselves and each other. After we had them cleaned up, they smelled as all puppies do―like little rays of heaven. They made us laugh hysterically―filled with curiosity and bolshiness, they tore around with ears and eyes peeled for the next great adventure.

Because we already had two dogs, lived in a town-house, and had a baby on the way, we decided that Jessy―the littlest puppy (who was the most energetic of the two) had to go and live with some friends on a farm. But Josh―who was sweet and soft and cuddly―would stay with us.

I remember burying my face into the back of his neck―when I was sad, or happy, or bored―and his eyes would light up. He would stretch his back out and roll his voice in a way only he could, and then paddle his paws up and down with a shy and bashful look of glee all over his face.

In my 29 years, we have welcomed seven dogs into our family―and had several more pass through on their way to new homes. Every one of them has had their own individuality. Their own character. Their own quirks. Their own light. Just like humans.

Meeting other animals―all other animals, from domesticated house pets, to farm animals, to rescues from the wild―it’s clear that personality and soul are not unique to man.

I remember, years ago, someone telling me that self-awareness is unique to humans. But if you’ve ever seen a dog looking sheepish when it’s destroyed something it knows it shouldn’t have, or a cockatiel admiring itself in a mirror, or watched an animal seeing its reflection for the first time and seen its awareness evolve until it’s clear that it recognizes that there is no other animal behind the glass―you have to agree there’s an awareness there that humans have only had the naiveite and arrogance to miss.

It’s true that humanity has come to rule the Earth. We have proved ourselves to be the apex predator. We have out-maneuvered, outwitted, and outplayed almost every other multi-cellular organism on the face of the planet. And what have we done with it?

The French writer and philosopher Voltaire was the first person attributed with saying: ‘With great power comes great responsibility.’ Despite our idiocrasy and arrogance, despite our striving and strategies, despite all that we have ever accomplished as individuals and as a species, it’s true what Gandhi said: ‘The greatness of a nation can be judged by the way its animals are treated.’

How far have we really come if we have not learnt this true humility? In each being we meet, there are incredible lessons in store―incredible joys and sorrows to bear witness to. Isn’t that what makes us truly human? Our humanity? 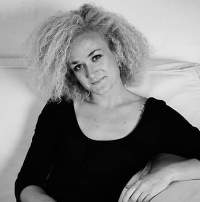 Catherine Simmons is a life and health coach student, training with the Health Coach Institute and Strategic Intervention with Robbins Madanes Training to help others overcome their deepest setbacks and get on the road to powerful transformation, revolution, vibrant health and personal change.

She grew up in Namibia and South Africa and has a deep love for the outdoors. She loves and lives with passion and compassion, while striving to embody fullness, adventure and deep humanity.

She now lives in Boulder, Colorado, in the USA with her pride and joy, Malaika, a five-year-old border collie with a knack for making people smile.