How I Learned that Stray Dogs just want Love. 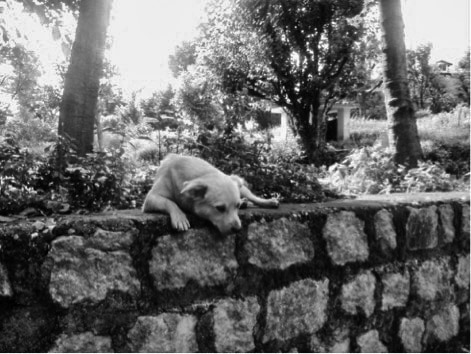 I was never sure what “love” was until I saw him looking at me with a big smile—for me that was love. The unconditional love and bond, which dogs have with the humans is unmatchable.

This is the story of my friend whom I met on my way home one day. The friend is a stray dog with whom I spent six memorable months of my life. Whoever, said that dog “is man’s best friend,” was speaking the truth.

One day, I was on my way back home, in the village of Rakkar, and I saw a dog searching for something in the garbage heap. I realized I was seeing a dog of around 6 months who was fighting and struggling to get something to eat and survive. I was eating biscuit and left with one and decided to give it to him.

I whistled, he saw me but continued on with his business. Again I whistled, and threw that biscuit towards him.  He came and ate that up. I don’t know why, but a huge smile appeared on my face. I started walking towards my home and noticed he was following me—maybe for something which I could give him to eat— but I had nothing left to give. He followed me for awhile but he eventually went back to the garbage heap searching for something to fill his empty stomach. I saw this and had tears in my eyes and walked off towards my home.

The next day, I met him again and I gave him some food. This routine continued for a week. Then one day when I was coming back, he saw me and came to me running and started playing with me. Moving around my legs and jumping on me. Then I took him to the side of the road where there was a river. We both sat on a big stone and had lunch together. I never had that kind of feeling of love before. Slowly and steadily this became my habit and I started spending time with him daily. I used to enjoy a lot.

DONATE NOW TO SAVE LIVES

I wished I could adopt him, but it was not possible. I was living in a joint family situation and they did not approve. I never expected that I would so attached to a stray dog. The perception which is being made by the society that stray dogs are not good and bite is wrong. Even I also believed this before meeting him. Now I know the truth. It’s true that the love animal gives us is incomparable to anything else. in this world. It’s because they never expect anything in return.

I had made a friend with whom I used to share everything. I don’t know if he could understand what I was saying,but he used to listen. One day, when I came to know I was told we would be moving from our current home to another village. Till this time I am finding short of words to describe that particular feeling. When it was my last day I went to him, spent some time and said bye to him.

I moved to a new place called Narwana. It took time for me to adjust myself to that new place. Due to my studies, I don’t get time to meet my friend, but that never stops me from thinking about him. Whenever I meet a street buddy, I think of him and I feed the innocent soul with food sometimes or give some love. He has taught me the value of unconditional love and care which I practice in my life.

I hope and wish to see him again in times to come. He will always remain alive in my heart.