Is Freedom Better than Convenience? 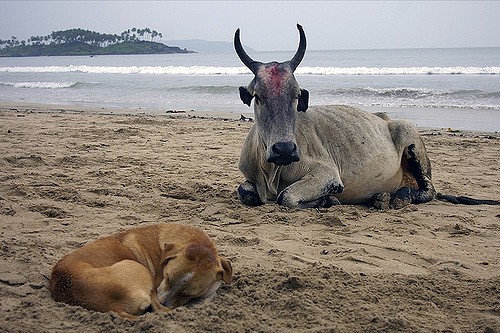 Dougie Wallace, a UK based photographer spent 14 weeks in Goa over the past two years.

In previous years he spent his time photographing the pampered pooches of England, but in India, he turned his lens to the stray dogs living on Goa’s beaches. After spending time observing and focusing on both, he now is posing the following question:

Who are the happiest: the ones who ‘belong’ to humans, giving paws to get tasty treats… or the stray ones, fighting and howling day and night, competing for the tourists’ attention and hoping to get scraps of food? To put it in existential terms: would you choose convenience or freedom?

When I first came to India in 2008, I was shocked an horrified at the condition of the dogs living on the street. No one seemed to care, and that is what catapulted me into a life completely different from the one I had been living. I used to look at dogs running in the street and living off of scraps and feel sorry for them. Nowadays, I sometimes can’t help but think they are happier than so many of the dogs that are tied up in backyards in the West.

In an ideal world, I wish all dogs had a loving home where all of their needs were met, but we do not live in an ideal world.
Even at DAR, we would rather put a dog back on the street where it came from and has a caretaker who feeds it and calls us when it is sick, rather than try to find it a home where the dog will most likely be tied up all the time and trained to be a vicious guard dog.
No matter what your opinion, it is hard not to love Dougie Wallace’s images. You can view them here.
~
Words: Deb Jarrett
Image: spiraltri3e/Flickr

At the age of 40, Deb Jarrett decided her life needed some shaking up. In fact, she needed to rattle her brains a bit. She was done climbing the corporate ladder, paying mortgages, and internet dating—so she quit her job and moved to India to help animals.  Unlike Elizabeth Gilbert, at this point in her life Deb had already done just about all the self discovery she desired on therapist couches, in yoga retreats, and at spiritual workshops. In fact, she eats very carefully, due to the risk of bacteria and parasites; she no longer prays, after experiencing the harsh reality of the developing world on a day-to-day basis, believing rather that compassionate action is the answer; but she has found love with a younger Indian man. You can find more of her writing and learn about her work with animals on her website.