How Jake and Chloe showed me Sangha. 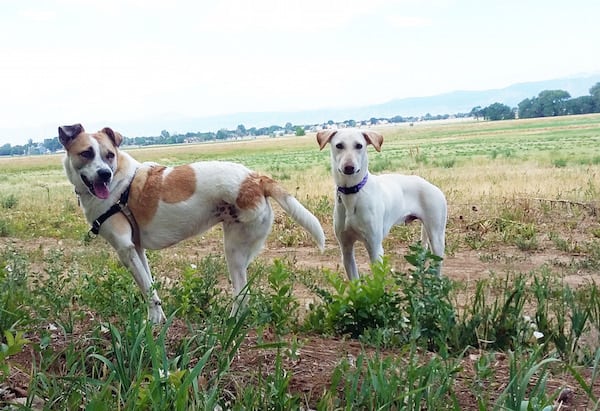 It all started with the photo of Jake’s goofy, gentle face.

I received a photo of Jake sleeping with a dog named Coffee, all snuggled up. Then I kept saying “yes.” Yes to everything that was asked of me. Yes, I will raise money to get them both to Colorado. Yes, I will foster Coffee until I find a home for her.

They arrived on the Equinox. We switched Coffee to Chloe, which means the first green sprig of spring, and never let her go. 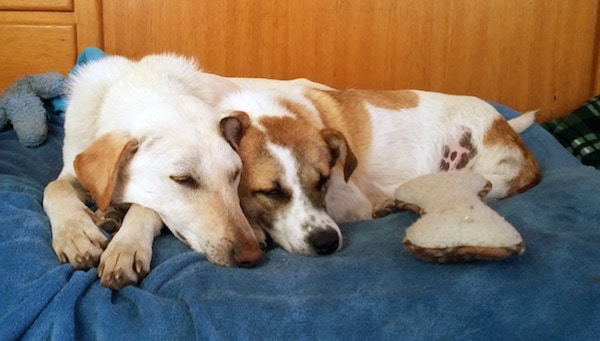 At the reservoir today, Jake puts his entire face into water and grabs a piece of sunken wood. He prances around like he stole something valuable. Chloe runs figure eights around bushes, cuts a groove into sand. She is graceful and has street intellect. She sniffs every bit of food before eating and is shy of people. Now Chloe asks for pats every morning. She paws at a particular rock in our backyard, hopping around on her back leg. She’s as fascinated by that rock as Leonardo Da Vinci was about a certain smile and how dragonflies flap their wings.

Chloe loves to play with other dogs. She fits right under Jake and picks his hind end up. They run fast toward each other and fake each other out. Jake holds onto Chloe’s neck until she yelps. Then Chloe grabs Jake’s back leg and he goes down and she jumps over him. Jake falls, surprised and curious. There is no one at the dog park today except schools of minnows, and a pod of pelicans. Jake sits and watches the pelicans paddle, so close and strange. He has pelican qualities, the long nose, perfect posture. Jake has patience and good-natured gentleness of a Sage. Well, a Sage who likes to show off and steal things— with grass stains on his back knee.

Within a few days of my email appeal friends and strangers give me enough money for Jake’s travels and now I ask for more for Chloe. I am struck by people’s generosity. I write back, “Just checking—are you sure you want to give 100 dollars twice?” Sue gave the pups a free checkup. Kathleen tells me to give them chicken broth when they land. Amy tells me about her fundraising attempts for her desi pup. Tom lugs a huge bag of organic dog food in my front door.

The enthusiasm from friends and strangers is profound. People listen, and I learn from this. The pups are deeply quiet when they rest, delicate, tenderhearted. These are Pariah dogs, street dogs. Dogs that are yelled at, stoned, hit, crashed into, and left. There are thousands, millions of Jake and Chloes that are on the street right now.

Varun from Airpets sends me a picture of the pups in individual crates, ready to fly, with their water and food dishes. “Send a copy of your passport,” he says. Whoops! Out of date. Judy said I could use hers. A week later Judy takes the pups to her house while I go to a funeral out of state.  What I mean to say is, I am suddenly a part of this world-wide community who cares deeply about living beings, particularly ones who, for whatever reason, cannot speak for themselves.  In my world- view that’s the Sangha. I had forgotten this was possible. It was as if everyone else knows about what Sangha actually means. I begin to remember through the eyes of the pups.

When I start to say yes, others begin saying yes.

In mid March I follow the pup’s journey. 17 hours by car to Delhi. I look again at the photo of the people in their winter hats and sweaters, blankets, pups in laps ready for night travel. I sit at my desk and call and write caregivers along the way. I follow the flight at 10 pm and then at 3am and 5.  There was so much snow in Newark the airport closed so they stayed in a kennel for two days. Then again a delay in Newark—agriculture. I call repeatedly. “The pudgy one jumped out of the kennel and into my lap,” a Newark caregiver says. Every single person I spoke with was kind.

Judy, Tom and Jodie, and Jodie’s son Liam, who is six, come to welcome the pups to Denver. While we wait other dogs were re-united with their caretakers. Then Tom says, “They’re here!”

Chloe won’t move. Judy screws the top of the carrier off and Tom lifts Chloe up. Jake walks right out and drinks Chloe’s water. I think of all the people who are also trying to come to this country. One little hitch could cause the whole project to deflate. Do they have access to their phones? Will people give them water and food during delays? Will families be separated?

At home Liam says he can see his reflection in Jake’s eyes. 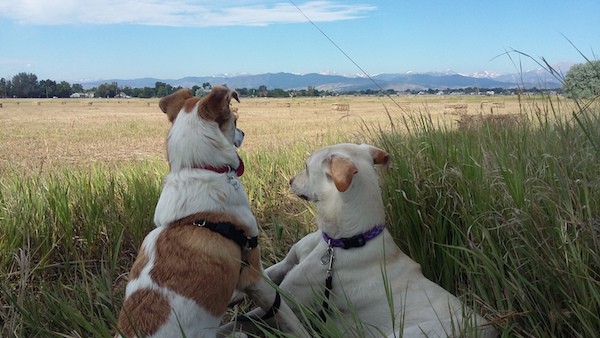 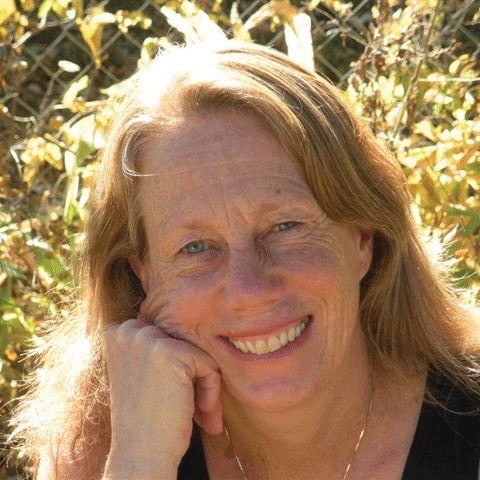 Katharine Kaufman teaches yoga, meditation, and the movement arts at Naropa University, Studio Be, and the Boulder Shambhala Meditation Center and in Longmont, Colorado. She teaches retreats at Shambhala Mountain Center and she also teaches therapeutic yoga privately.

Katharine studied in India with Pattabhi Jois and Dr. Shankaranayanna Jois. A long time student of Richard Freeman’s, she taught at the Yoga Workshop for 13 years. She has taught numerous people from heart disease patients to advanced Ashtanga practitioners from all over the world.

Well practiced in all the major modern dance techniques, Katharine holds a Masters in Fine Arts degree from Arizona State University in choreography and performance. She taught at Colorado State University. She currently teaches Contemplative Dance Practice at Naropa University. Katharine is lay ordained in the Soto Zen tradition by Kobun Chino Roshi. She is also a published poet. Her chap book is titled, What I Spit Out on the World While Trying to Eat Like a Lady. Katharine is a warm and precise senior teacher with a creative flavor and gentle sense of humor.