From the Himalayas to Hjaltland. 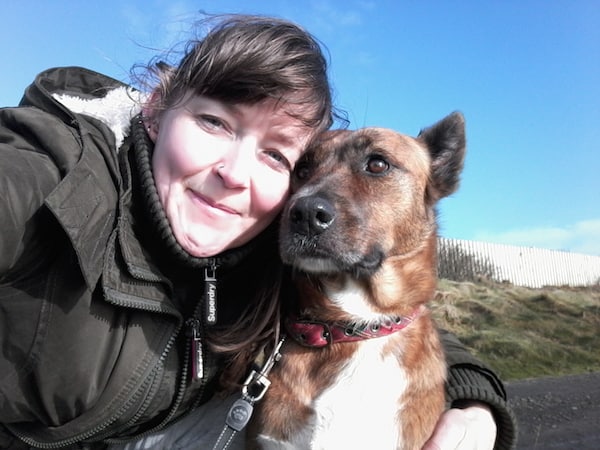 It began in the India Himalayas…

Now, just to be clear, I have a love/hate relationship with India. Those of you who have been there may understand why.

It’s challenging to say the least. (I have the luxury of reflecting on it because I’m white and privileged).  Luckily, I found something else on the street—something to love—and that something was Charlie.

Born on the streets of McLeod Ganj in Himachal Pradesh, below the outer ranges of the Himalayas, Charlie came to me by way of her brother, Vito.  Vito came to me by way of an ex-boyfriend, who was living as part of the Tibetan diaspora in India.  Tibet called him home though, and through the heartbreak, I had comfort in a shining little light called Vito, who helped ease the pain marvelously.  Home, or perhaps heaven, called him back too though, and I was never to see him again either.  Enter Charlie, who thankfully had joined our herd before Vito made his exit.

Charlie, being a very independent soul, made me sometimes wonder if it was actually the right thing to do to take her in.  As well-meaning as we humans are, sometimes we get it so wrong.  And yet, there is so much disease and potential danger around for street dogs that I convinced myself it was the best for her.

Even after the “adoption” she would wander off from time to time. One day she was tempted by a bunch of Tibetan kids with biscuits.  They took her far up the mountain, intending to lead her to their school where they wanted her to live.  Lucky for me, my friend was up there hiking that day and happened to spot her.  After a phone call to me, we established that, yes, Charlie had been “abducted.” After the kids got a stern talking to by Ed, Charlie was bound for home.  Another day, she simply followed someone into town and couldn’t find her way back.  After much frantic searching and inconsolable bawling, I concluded that a leopard had gotten her (same as her brother Vito, or so the rumours went).

However, destiny once again brought her back to me.  Having sent out an email to the expat community, someone thankfully got back to me saying they had spotted her in town.  Not far from where I first met Charlie, we found her cold and a bit dirty but happy to see me.

Not completely convinced I should still be in India, I travelled back to Scotland, but then I missed my doggie—so I would return to India. It went back and forth like this, time and time again.  Then Charlie and I made a new friend, and that friend became my husband.  Charlie was fond of him from the start, until she sensed that her position may be in danger.  At which point, she became madly jealous and moody whenever Sudeep was around.  But slowly, and as my absences on trips home became longer, she began to see him as a permanent fixture in her life. She somehow realized that this was someone she’d have to get along with (she wouldn’t admit it but she loves him too).  His parents are a different story.  They are self-professed non-dog-lovers, who have fallen head over heels for this mutt.  And she adores them, and their morning ritual of feeding her biscuits of course.

So it was all a tad bittersweet when we finally booked Charlie’s passage from India to Scotland. I had finally made the decision to move home to Hjaltland (Shetland).  I had questioned and questioned and questioned the decision.  The guilt was endless…taking her away from her home, the only place she had known since birth, and away from her “grandparents,” and their biscuits, and fussing over her.  For whatever reason though, my life is tied to this dog’s life.  There is no getting away from it.  Our coincidental meeting, the luck that brought her back to me twice, and how, through all the love, heartbreak, drama, hard and happy times I’ve had in India, she has been there for it all.  She’s my best friend and my absolute love. She can never break my heart, at least not until it’s her time to go.

So we did it.  We got the rabies titer blood tests done and waited the necessary three months to be allowed to travel (no quarantine now).  My husband Sudeep and his parents got her in a car, drove her 12 hours to Delhi, accommodated her in Delhi for 5 days, put her on a cargo plane to Heathrow for 9 hours, and we all just hoped for the best.  Sudeep flew in, and with excitement we made our way to the Animal Reception Centre.

Told to take a seat, we were informed “There is a problem.” Our hearts sank. The woman who worked there told us that the wrong microchip number appeared on her rabies titer paperwork. It didn’t match with Charlie’s microchip.  It appeared to be a clerical error but thoughts of quarantine or sending her back to India ran through my head.

At that moment, I also knew I was prepared to travel back to India to be with her.  I’ve made a big mistake, I thought.  But two long days later, we were back at the reception centre after being told that the lab in Germany had rectified the clerical error and that Charlie could be released.  And through the door she strolled, delighted to be with her people again, not at all traumatised by her plane journey and luxury (read expensive) boarding at Heathrow.

Next came the car portion of the journey which she did not enjoy, although she did spot her very first camel at a farm shop rest area in northern England, which I’m sure she was thrilled by.  Totally normal that one of the first animals she met in Britain was a camel. 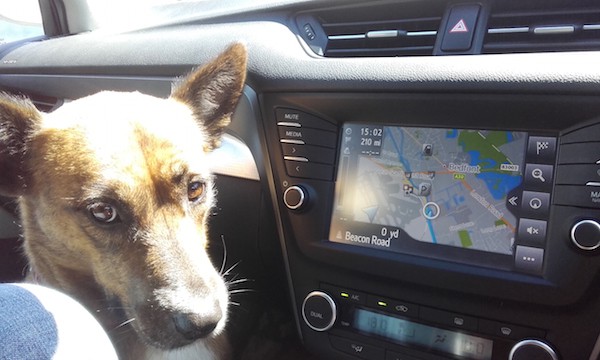 A few days later we rolled into Aberdeen. Ecstatic to be out of the car, she went full steam onto the Northlink ferry (the ferry which connects the Shetland islands to mainland Scotland).  She did not love the look of the kennel she needed to be in for the ferry ride, but to be honest, in the morning I found her alert and barking and excited with no obvious signs of puking ( always good).  Charlie had arrived in Shetland, a far cry from the steep hillsides she has known.  Her monkey-chasing days are long gone. She has, however, gained a set of equally generous (meat) treat-giving Scottish slaves..eh..I mean grandparents.

It’s astounding, you know.  I am continuously taken aback by the resilience of this animal, and dogs in general.  We’ve plonked her in an alien place on the other side of the world and she carries on, much unchanged.  Don’t get me wrong, she is mischievious and very much has her own mind. She doesn’t listen most of the time, and badgers us continuously for walks, or simply just mopes in the corner sighing if she doesn’t get what she wants, and what she wants is to chase sheep. 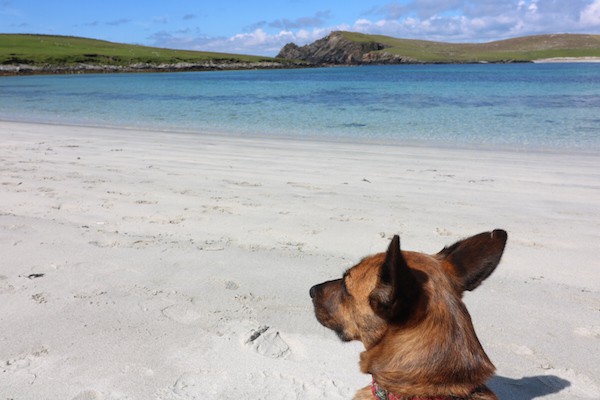 But every day, she pulls me down towards the mysterious pier so she can conquer her fear of the big water…a.k.a. the sea.  She started on wobbly paws, tail between her legs and has built it up to a more confident, inquisitive stroll.  She hasn’t dived in yet, but she will.

She’s fearless, she’s Charlie.  My one and only free-spirited Himalayan legend. 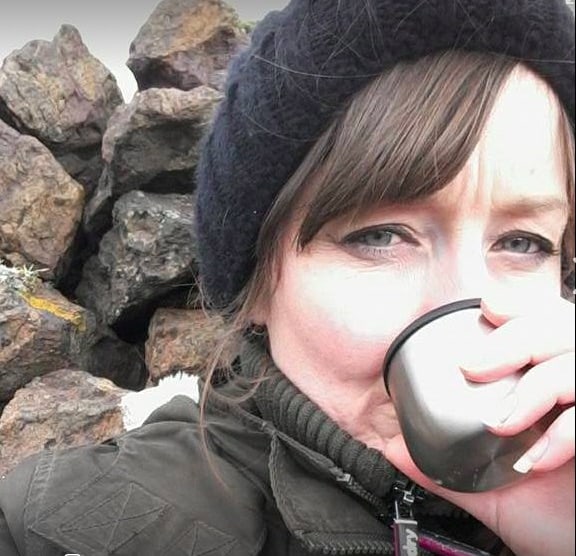 Vaila Macintyre is an ESOL (English as a second or other language) teacher from Scotland.  Her job has taken her to many countries around the world and the last five years she has spent in Dharamsala, India.  The winds have blown her home to the blustery Shetland islands for the time being but the wanderlust remains.  She dabbles occasionally in a bit of writing and yoga teaching but most of her free time is taken up with dog-walking.