Finding a Home: Based on a True Story 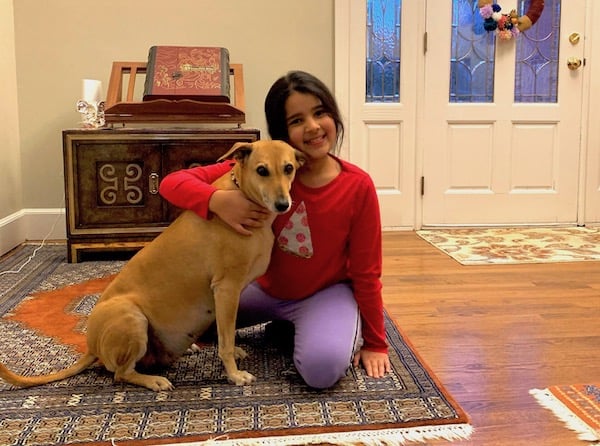 Have you ever wondered what it means to be lost? Or being….unfound? That’s what I felt before Akanksha took me in and said, “It’s ok.”

You might be wondering who I am. I am Angel, a street dog, who roamed the streets of Dharamsala, India. The day I came to Akanksha’s dog shelter, I met a dog named Billee. I laughed when I heard her name. I hadn’t laughed in a long time. The reason I laughed was Billee means “cat” in Hindi. Billee was a brown dog with a short tail. Scars coated her fur, just like all other dogs. Seven of my scars had come from when I was pregnant and some drunk people attacked me with knives.

When weeks and months move slowly like this, I make tea. I don’t care much for the taste, but stirring the milk and doing that motion that my nani taught me, it takes me back to a peaceful place where the taxes don’t need to be paid, and I’m happy.

No dogs have been adopted in a long time. Finally, the phone rang. I answered. The conversation that changed Angel’s life began. I don’t remember the details, but the main thing was that Angel had a home. A home. Only some dogs get to see that.

The ones who deserve it usually do. Angel deserved it. No doubt about it. But one thing had me concerned. Angel hates traveling, and her new home was far away – a sixteen hour flight! Talk about luck. Another thing is on my mind. Angel is like family now. She is like Billee, who has been here five years. It would hurt me if Angel left, but I always hurt when a dog leaves. Before Angel, I never thought about how the dog felt about leaving.

I’ve been friends with dogs before…But nothing like Angel. She’s like a sister to me. She’s always been there, trying to make me laugh even in the worst of times. I overheard Akanksha talking on the phone yesterday evening. I heard her talking about Angel leaving. I hope with all of my heart that I was dreaming. Which I wasn’t. I think. Hopefully I’m wrong. In my experience, hoping works. The belief that something will happen is usually enough to push someone to do something. Hoping works because it says to you, “you can do it.” But I’ve hoped for a home for five years. 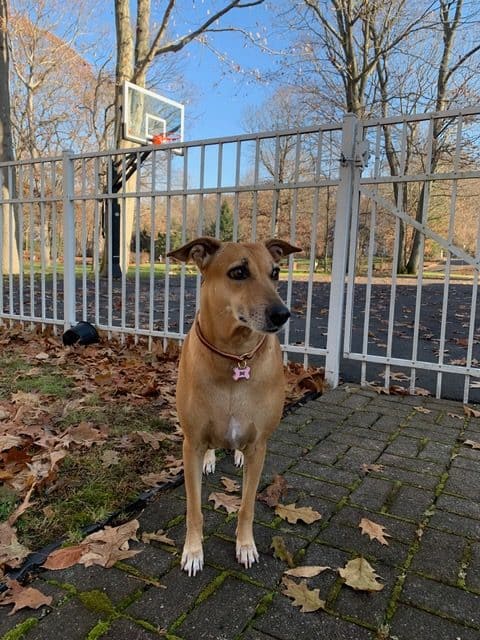 I am with Billee, playing a game of tug-of-war with a stick. I won, which is weird because we’ve played thousands of times, and I haven’t ever won. Something is up with Billee. She used to play with me all the time, and now she either doesn’t want anything to do with me, or she’s all over me.

I dropped the stick and looked Billee in the eye. “Billee, tell me.”

“What?” asked Billee. I gave Billee the look and she sighed. “Fine. You win. I overheard Akanksha. She was…well, she was talking to a buyer. For you. In America.”

I took this in, wondering what my response would be. “Why have you been acting this way Either really close to me or far away””

“I want to spend time with you Angel, but I don’t want to be too connected and then when you go away, I’ll be really sad. Sad isn’t even the right word.”

Angel’s last full day came. Tomorrow she’ll be on a plane to America. I kept thinking about all of her lasts. Last breakfast. Last first walk of the day. Last lunch. The last list grew and grew and grew. All the other dogs said goodbye to Angel. I thought about how they felt about this. Angel made a huge impact on everybody’s life in Dharamsala. I wished she could stay.

The night came. Last night of sleeping in the crate. I snuck out of my crate at midnight and snuggled with Angel. I wondered if I would ever meet another dog like her.

Day came. Angel’s last time in Dharamsala. I watched as Angel got out of her crate. I would never see her do that again. Never. I watched as she walked out the door. I said goodbye to her. She said goodbye to me. And then she left. I barked. She barked. We stopped barking when we couldn’t hear each other anymore. I never saw her again.

You must be thinking what a sad story this is. I am assuring you that it will be okay. For Akanksha. For Billee. For Angel. Let me tell you the story. Or, at least part of it. Angel got into the truck to go to Delhi so she could be at the airport where there was a plane that would take her to America. She was in the truck for a long time, when finally, it halted to a stop.

She walked out with an itchy collar on her neck.

She waited in a room. It was gray with paint peeling in places. The ground was hard concrete. There was a desk with an old woman sitting at it. She got up and walked Angel to the plane. Angel fell asleep and didn’t remember the plane ride.

I have a home. That’s what Akanksha said. In Punjab. I don’t feel bad about what happened to Angel. Sure, I miss her, but I feel happy for her. I don’t wish for her to be anywhere else. I’m not in Punjab yet, but tomorrow I will be. Angel is in America. My little Angel. Oh, Angel.

Angel and Billee are still friends, though they cannot see each other.

They both have purpose.

They both mean something.

They both have forever homes.

They have been found. 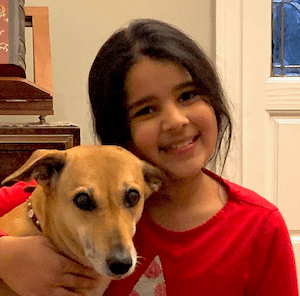 Isha is 9 years old and is in 4th grade. She lives in Connecticut with her Indian rescue dog Mirchi (aka Angel). The story won a prize in a local writing competition. Mirchi was adopted from Rescue without Borders.