Cats, Dogs, and Living with Disablities 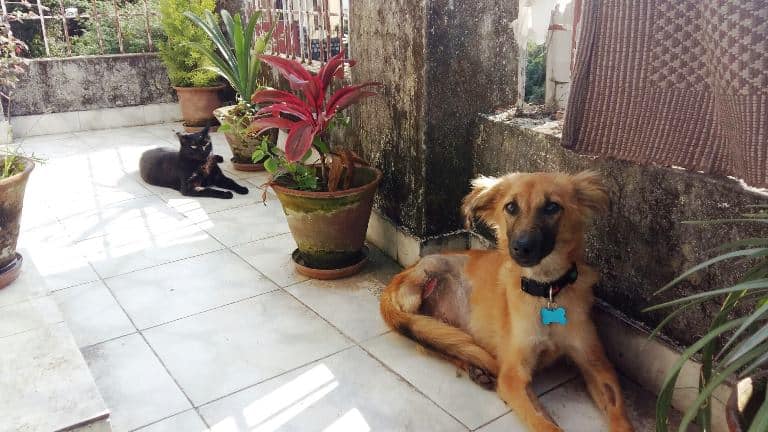 I had always considered myself a cat person, but this is the story of how a disabled dog won my heart and has taught me more about myself and about inner strength than years of meditation ever have.

Growing up, my family always had cats, so naturally I was more in tune with them and understood their needs. It was an effortless relationship. Now, I work at Dharamsala Animal Rescue and most of our in-patients are dogs. Initially it wasn’t easy for me to understand them, I didn’t dislike them at all, I had just never developed a rapport with them.

Kamlesh, our manager, kept telling me to adopt one of our rescues, but I always made excuses. ‘Zema (my cat) would hate it,’ I’d say. ‘Wait until I move; my place is too small.’ But deep down I was uncertain if I could handle it, or even wanted a dog as a pet. It seemed another level of responsibility I didn’t think I was capable of.

There were countless dogs that I fell in love with at DAR, usually the ones that seemed to be scared or sad and had the worst kind of suffering or damage. I think being exposed to that constant suffering opened my heart.

One day, a year and a half ago, along came this cute, fluffy six-month-old pup. The staff had named him Sky. I didn’t notice him at first—he just merged in with all the other in patients at the time. He had a nasty, swollen infected back leg. The vet assumed he had been hit by a car. A few weeks later we had an outbreak of distemper and he had tested positive so he was moved into quarantine in our office. This was the start of our relationship. He used to sit on my lap while I worked, and slowly but surely he stole my heart.

Unfortunately for him, things got worse. His leg wouldn’t heal, so they decided to amputate it. He then had what seemed to be tick fever and his eyes started to turn opaque. Then the amputation wound burst open and needed daily bandaging, and as this all happened during monsoon, it took months to heal. On top of that, blood results showed he had kidney damage. In spite of everything, fate had already determined that he was the one, so after much thought I announced to the team that I was going to adopt him. He then became Henry. 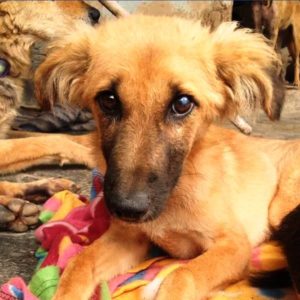 In mid-September, Henry came to live with Zema and I. I have to admit I was very nervous. Could I actually do this? I was filled with so much doubt. However, introducing him to Zema was easier than expected—they’ve never become best friends but they tolerate each other and we slowly adapted.

All was well for about eight months. We had our little family unit—the pair of them slept on the bed with me at night, Henry taking up eighty percent of it while Zema and I were confined to the remaining corner. I loved every bit of it, but I have to admit my relationship with Zema was easier. It always seemed to be a learning curve with Henry. I wasn’t a natural with dogs, but I managed.

Then one day last May, I started to notice that Henry’s back leg would keep giving out when we walked and he couldn’t climb the stairs. He was treated for ten days with pain killers and he seemed to improve. At the end of June, I was due to fly to England for a month—it was the first time I had ever left Henry. A few days before I left he couldn’t walk at all, and he had lost control of his bladder and bowels. A volunteer at DAR was staying at my place to look after Henry and Zema, but I was so anxious leaving him, not knowing what was wrong.

While I was away, our new vet, Sonia, examined him. She thought he had pulled a ligament and all he needed was strict rest for two weeks. However, about ten days before I was due to fly back to India, I learned that there was no improvement. Sonia now thought it looked more like a neurological issue—possibly from the distemper—but she wasn’t sure. Ultimately, we would never find out what actually caused it.

I was devastated. I felt so helpless, being so far away. It took a lot of inner strength to be as realistic as possible until I returned. I couldn’t help wondering why this poor little thing had suffered so much.

When I got home a week later, Henry couldn’t walk at all. He moved by dragging himself around, his back leg trailing behind him.

I cried a lot over the following weeks, feeling utter despair and helplessness. What future—if any—lay ahead for him? Sonia was very supportive and gave me lots of advice but I felt overwhelmed by all that he would need: A special diet cooked each day to control his kidney disease; his bladder expressed twice a day to prevent infections; a wheelchair to get around in and a nappy at night—not to mention the constant cleaning up after him and carrying him everywhere. It was monumental task and not something I had wanted to take on, especially not with my first dog. All sorts of strong emotions played around in my heart and, I will admit, I often thought that maybe euthanizing him was the best solution. However, he remained such a happy dog, so full of life, I just couldn’t do it. And Sonia assured me he wasn’t in any pain. 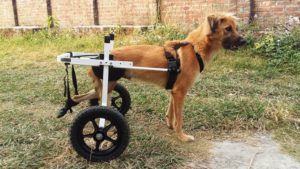 Fast forward to today. The past five months have been incredibly tough. I am exhausted and have more than once had melt-downs. But amazingly, we have turned a corner. Henry is doing well. He loves to come to work with me in his wheelchair. We get such positive responses from the local community in Rakkar—people driving by stop and ask to take a photo of him. Only once has someone questioned me about why I am putting so much love and care into a disabled dog, but it just gives me more strength. I am doing the right thing for Henry and in the end, it’s my choice.

We have developed a good routine. The bond between us has become so incredibly strong. Yes, it is challenging and not something I had expected, but I’ve stopped asking myself why, stopped projecting into the future. I’ve learned to just take one day at a time. Don’t get me wrong, some days are still difficult and I get frustrated, but I have learned more about overcoming struggle, inner strength, patience, and compassion in the last five months than in all the years of meditation I ever did. Animals have the power to teach us so much, we just have to be open to their lessons and the unconditional love they give us. 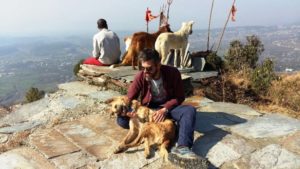 I would say I am converted now—I am truly a dog person. The joy Henry and Zema bring me each day is worth the struggle and I wouldn’t have it any other way. 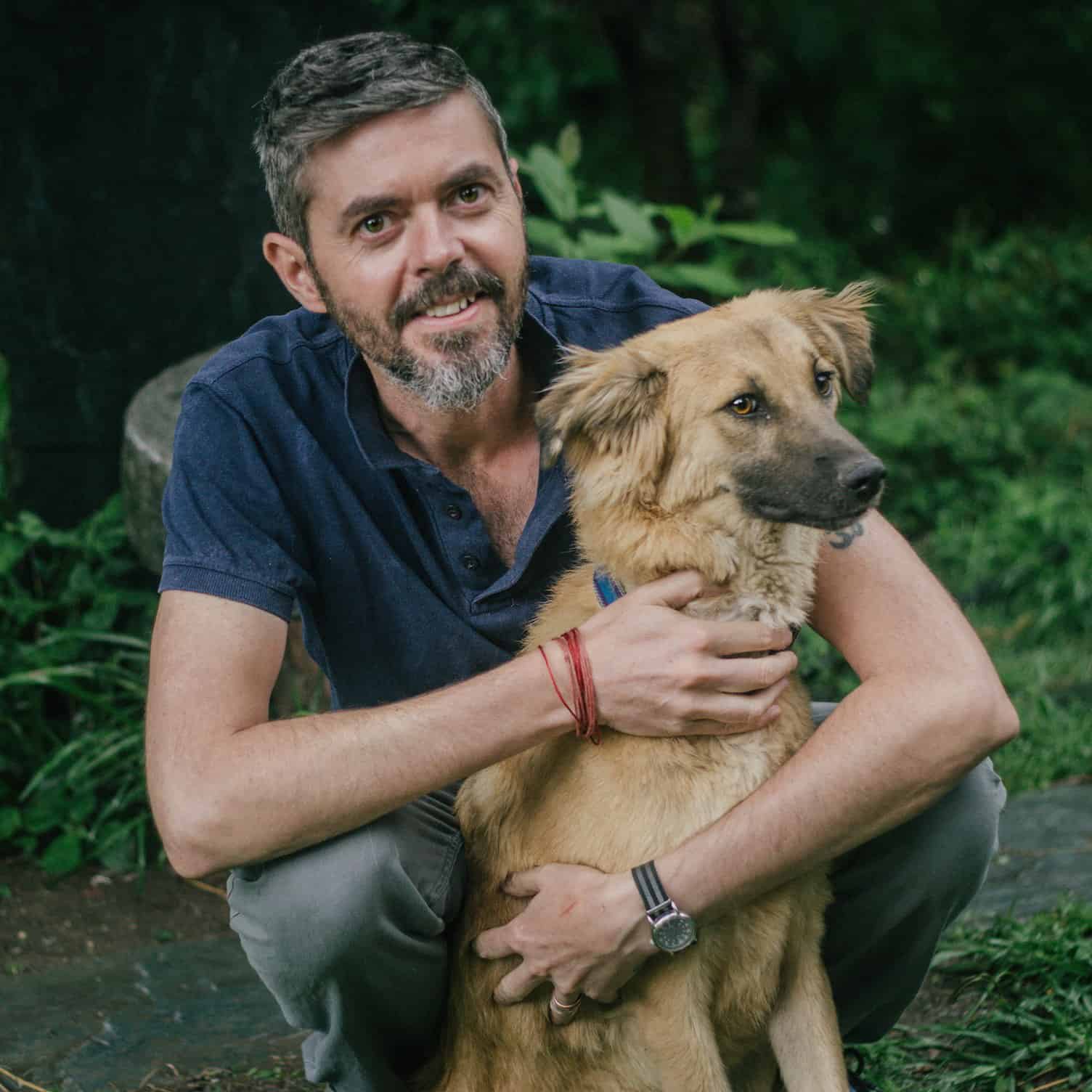 Originally from England, Richard Scambler worked in local government social housing and, dissatisfied with that life, he spent many years travelling around Asia. In 2007 he finally settled in Dharamsala. In 2014 he was given the opportunity to volunteer at Dharamsala Animal Rescue as the operations manager, and there he finally found his purpose and meaning in life. He lives a very simple and quiet life in Mohli, near the DAR clinic, with his cat Zema and Henry, his dog.