My Boy Bill: To Love a Desi Dog. 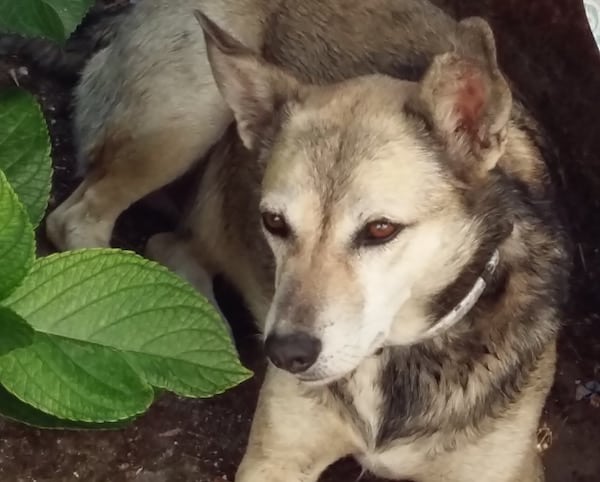 Ours was a slow burning love.

It was never an instant type of love.  We had to warm to each other.

Both with trust issues—I was recovering from  a broken heart —and he was just trying to find his place as a street dog in the world. In the beginning, he kept venturing into my house to stay a while, only then to leave.  He was not sure if he was welcome. And honestly, I wasn’t sure if he was either.

I had a couple of experiences with desi (desi means local in Hindi) dogs.  I had wanted to adopt one, but there were so many too choose from. This being the situation, I let one choose me.  The first one who chose me was a lovely little black male puppy who was living with his mother outside my unit block.

I would go down to feed him every day and night and bathe him. It was the love I was looking, but it was short lived. Being ignorant in the desi dog world, I did not realize he needed to be vaccinated. I was completely unaware of this fact until too late.  The puppy had contracted parvo which is a very serious virus and most of the time, deadly.

Parvo attacks the dogs insides rapidly dividing cells, most severely affecting the intestinal tract. Dogs become lethargic, lose their appetites and have severe diarrhea and vomiting. There is no cure. All one can do is support the dog’s immune system and hope it can fight through it. If not, the dog will die within a short time.  This is what happened to my puppy.

It was something I will never forget. Some local loving dog owners whispered Buddhist mantras in his ear in the hope that it will find a better next life. I found another puppy after him, only to be bitten by a snake and dying just about instantly. I was heartbroken.

I had already committed to taking his half sister, BoBo from my neighbour. I did not want two dogs, so I tried to shoo him away, but that did not work.  I took him to the local animal rescue (DAR)  when  he got sick, hoping they would keep him. Once he recovered, they dropped him back near my house, which as I later learned is the legal course of action in India, but at the time, I was irritated that he had come back.

However, something in my heart said to keep him, that he was meant to be with me.

After his sister BoBo, disappeared a few years ago, he came with me looking for her.  I could sense he wasn’t really looking for her (they were not close).  I think he had sensed she was not coming back, and this was his opportunity.  A local villager has told me he is wise, a bit like a village elder who watches and waits then gives out pieces of wisdom. If Billy could talk, I think be giving out very sound, solid, advice.

Billy is different than other desi dogs. He looks strong and is strong. He is fairly self-sufficient (not for food though), silent, and most of all resilient.  He often gets mistaken for a Husky with his multi-colours of beige, black, and white with strong course hair.  His eyes of course give him away; big, brown, round clear eyes.  All seeing and all knowing.  The eyes of a survivor.

So we courted each other.

My loves became his loves and vice versa.  We both love walking and have covered many kilometers around the Himalaya foothills where we live. During our walks he meets up with his friends. He loves other dogs and they love him.

In the past, he occasionally ran off with his canine friends high into the mountains only to arrive home just as I reached.  When I was mad at him he would skulk away and know he was in trouble. Now, he is older and wiser there is no need to shout because he is such a well behaved dog—except for the the one thing that still gets in him trouble—chasing goats.

The goats roam free in the village I live, and Billy cannot resist the temptation. Unfortunately, one day a local goat herder tried to black mail me into buying him a new goat, saying Billy had bitten him and he was not longer “good.”

As it happened, the goat had been sheared the day before and had nicks all over it from the shearing, making it impossible to distinguish between nicks from shearing and possible bite marks from a dog.  The story ends with me paying the man RS 3000 for the goat (who now resides with my friend) and no longer allowing Billy off of his lead. Billy has accepted his fate, and I think we both realize that one goat and dog story is one too many.

Being Australian, it is impossible for me to ever take Billy home with me. As the years have gone by, I have wanted to spend more time in Australia and have to leave Billy for months at a time. When I do go, I make arrangements that best suit him…so he can continue to use his instincts as a street dog who loves to cruise around the neighbourhood and is revered as the dominant male.

As I thought more about it, I think he would suffocate in my other world. I can’t imagine him being caged in and bound by rules and regulations.  What kind of life for him would that be…not being able to jump the back and side fence to go out exploring around the local neighbourhood. He would suffer, and I would also suffer knowing that he is a desi dog by birth and by heart.

With Billy, I have found comfort, a surety of unconditional love.  We have been given a passport to enter each other’s  inner world and love and treat each other well.

He plays by my rules and I will care for him until the day he or I die.  He has embodied my need for companionship, and I in turn embodied his.  I take him out to meet the other street dogs he knows and plays with.  I give him a comfortable bed and food twice a day, peppered by his favourite snacks. I even took in another dog, who coincidentally is his mother.  I understand he needs a dog companion, that I’m not enough.

We’ve become like two old people, sitting  comfortably in their chairs side by side watching the world go by. It is this understanding that sits between us, the comforting arrangement,  one that may never repeat itself in my lifetime and so I treasure every moment. 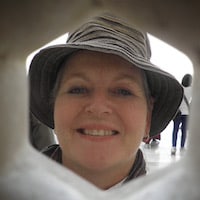 Sharon Thrupp has lived and worked in Dharamsala, India for the past 13 years. Sharon is passionate about India and the Himalaya region and has travelled and trekked extensively throughout. She considers Australia her home by birth, but India as her home by heart. In her spare time, she does yoga on her rooftop with the Himalayas as her backdrop and wanders the back roads around her home with her desi dogs, Billy and Maddie.

She also runs a tour company Ekno Travels in both India and Australia.