An Ugly Christmas Sweater and Being Zen gets me Adopted 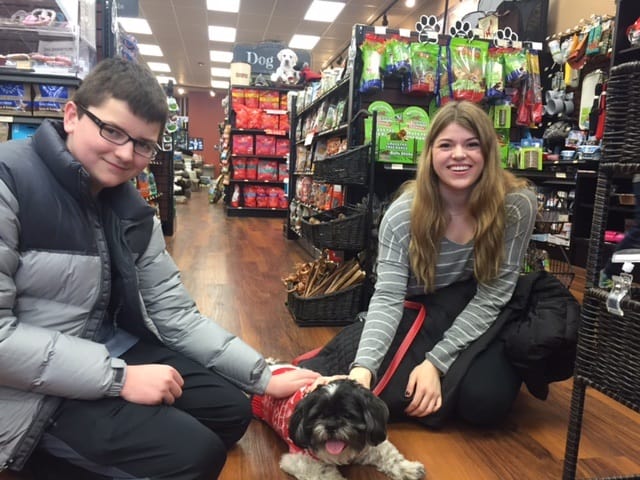 It was a cold day in January when my foster parent from All 4 Paws dressed me in an ugly, red, Christmas sweater and loaded me into her car.

I had been with her for only three days during which I was loaded with shots and my infected sores had been treated. Some time before, I was taken from my original owner’s home. I loved them, but they could not take care of me properly anymore. My allergy induced rashes had become infected, and I was not taken for walks and had gained weight. I don’t know why I was taking this car ride today, but every ride I had taken over the last couple weeks meant that I was going to yet another new home. I was so sad to be in the car again. What was going to happen to me? What had I done to be treated this way? My leash was attached to my collar, and I was led into a pet shop. I was the first dog there so all eyes were on me. A blonde woman with two teenage kids were also there. They seemed disappointed in me somehow, but I still went right over to meet them. I love meeting new people and they looked like they needed some love. As they petted me, they made some comments about my sweater. They called it “ugly” but still showed me love…so all seemed okay. As new younger and bigger dogs came in, the blonde woman’s group kept running over to the dogs. But they kept coming back to me. I laid down next to the blonde woman and splayed my legs wide. “Look, a combination of frog pose and child’s pose” she said. The teenagers laughed. The blonde woman asked my foster parent about me. “He is a dream,” she said. “He is calm, sweet, and fully house-trained. He is good with kids and you can see how well he gets along with other dogs.” The blonde woman asked the teenagers to look me up on the adoption group’s website. “His name is Yogi Bear,” they said. The blonde woman teared up, “A perfect name for the dog of a yoga teacher,” she said. 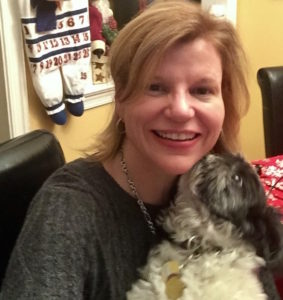 She asked the teenagers what they wanted to do, and they said that they wanted to take me home. The teenage girl asked the blonde woman “Are you sure Mom? You wanted a dog to protect you. This dog is barely 20 pounds. We will need to protect him.” “I think we will protect each other. Even though he seems so sweet and adorable, he was left behind for some reason. I can relate and I think we can take care of each other. And with a name like Yogi, I think he was sent by the universe to be with us.” My foster parent was so happy that I was adopted at my first adoption event she gave my new family the ugly Christmas sweater to keep me warm on the cold ride home. I was still very anxious during the car ride – I have been on so many car rides that led to entirely new environments. But I am hopeful that I have finally found my forever home. ~ Want to read more from Yogi? He has his own blog with lots of stories. 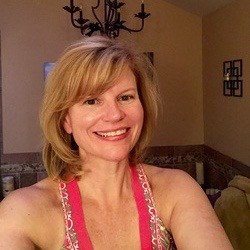 Donna Yates Kling has been studying yoga for over 20 years and has experienced the benefits of the yoga lifestyle first hand. Her yoga practice helped her go from a multi-decade married person with two kids at home, no dog, and a job that did not serve her beliefs to a divorced mother of two with a dog named Yogi Bear (he was adopted and believe it or not that was the name he came with) and a career that inspires and nurtures her.

During this journey she lost over 25 pounds, expanded her community of friends and found love. Donna hopes to help others find a more peaceful and happy life through the yoga lifestyle. Donna has completed 250 hours of Yoga Teacher training, 300 hours of Yoga Therapy training and completed Pilates Mat Teacher training. She also has an MBA with a concentration in finance and is a Chartered Financial Analyst who works for a Fortune 500 company. Donna visited India as a child when her dad started an air conditioning and refrigeration school as part of a missionary effort. You follow Donna on Facebook and Instagram.