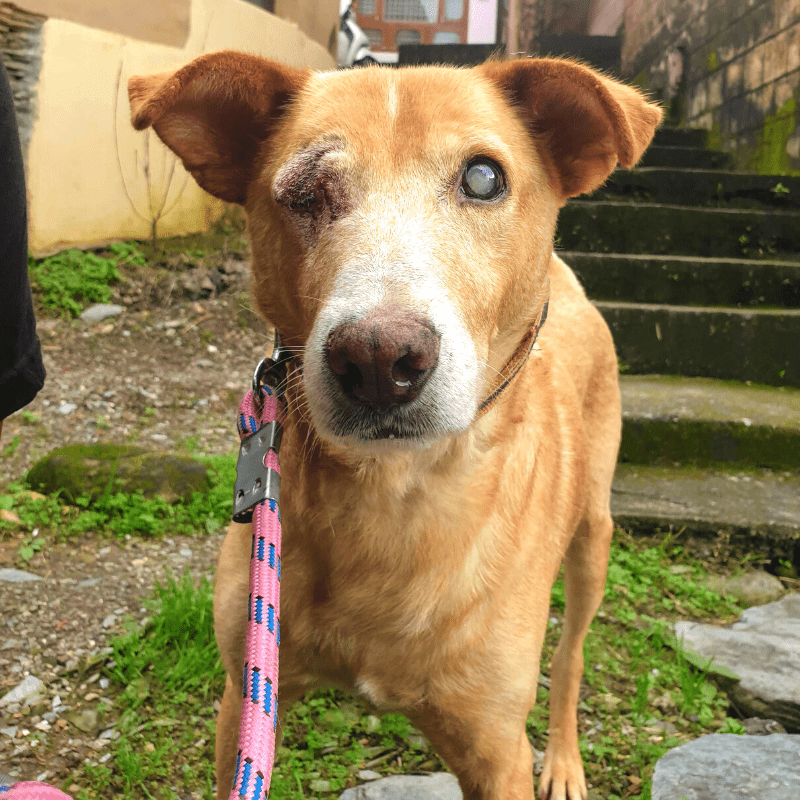 If you live in the Kangra District of H.P. and are interested in adopting Sukh, please call 98828 58631 Monday – Saturday 9:30am – 5pm to set up an appointment to meet him and fill out an application.

If you are in the US or in Canada and want to adopt, please see application below.

Story: Sukh was one of the lucky ones. He had lived a decent life on the streets with the help of a local feeder of street dogs. Until one day, she noticed he could no longer see. On examination, we found out that he has a mature cataract in his left eye and severe lens laceration in right eye, the reasons behind his partial blindness. We decided not to release him because he couldn’t survive on the busy streets.

October 2022 Update: Sukh has been living with us for over a year now. Over time, the cataract in his right eye has prolapsed into the anterior chamber of the eye, causing him extreme discomfort and chronic pain. We decided to perform an enucleation surgery to relieve him. The procedure, which took place in September 2022, was a success. While he waits for a big hearted person to take him away from the shelter & give him a permanent home, for now, he can have a life free of pain, thanks to your support.

Personality: Sukh means happiness. It is the perfect name for this gorgeous sweetheart who absolutely loves being around humans. He is one of those dogs that is just longing for a home. Many street dogs like freedom, but Sukh, as soon as we put him on a leash it was like he had been doing it his whole life!

Despite being blind, he continues to be a happy boy. A real sweetheart with so much love to give. He gets around really well using his senses of smell and sound. However, he needs a special home where people are aware of his disability and can be patient and gentle. When you first meet him, you will need to let him know you are there, talk to him gently, and sniff you until you become familiar.

Sukh loves to be petted around his neck and rump and to show it he becomes very animated and excited! He makes a funny growling noise when he gets excited and happy. He is such a gem! He walks well outside, he is very curious about his environment. He doesn’t get nervous on the roads. At the shelter he loves getting treats while sitting, going for walks and hiking, and cuddling and playing with the team.

He is ok with other dogs around him, but mostly he doesn’t seem to be interested. Sukh would prefer a home with humans who respect his boundaries.

Who will have the chance to be part of Sukh’s rescue story? Apply to adopt and help Sukh today! See application below.